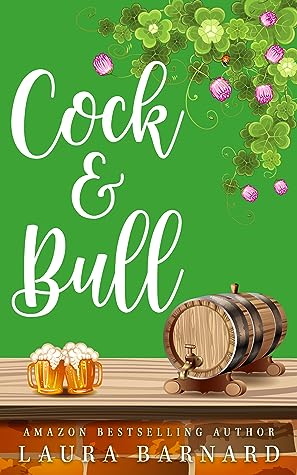 When Phoebe and Ella Bellerose left England behind to run the Irish pub they’d inherited, it sounded like a great adventure… until they saw for themselves what a wreck they’d been left.

With no experience, a severe lack of money, and a rival pub owner threatening to ruin them, the two girls aren’t convinced they can actually make this work.

Not until they meet Clooney Breen, who just so happens to be packed with charm, charisma, and barman skills that could help them all survive. It also doesn’t hurt that he’s the son of Cock & Bull’s biggest rival, and he’s desperate to help Ella and Phoebe teach his father a lesson.

But can mysterious Clooney, with his obvious secrets and desire to be their saviour, really be trusted? Or are they being played by this handsome lothario who seems too good to be true? Their problems only seem to grow and grow, until Phoebe discovers a ‘gift’ of her own that changes everything for all of them…

I really enjoyed reading Cock & Bull. I loved the fact that it took place in Ireland and it was really nice being able to visit that country again even if it was just with words.

It did take me a bit to get into the story, but I loved the surprising twist that happened later on. I love a good enemies to lovers story too. It was funny too! I definitely recommend this book for fans of Sophie Kinsella.

I voluntarily read and reviewed this book. My thoughts and opinions are my own.

Thank you for reading!